By Jeff Rosenberg – published 2010.  (Note: For permission to reprint this article, please contact Jeff at inner.harmony@sbcglobal.net)

Although no ‘official’ study has been done to determine the rate at which adrenal disease occurs in ferrets, I personally believe that at least 40%-50% of all ferrets will grow adrenal tumors at some point in their life. If you know the symptoms to look for, and the treatment options available, then you may be able to catch the adrenal disease in its early stages, which will help to slow its development and help to prolong your ferret’s life.

Adrenal disease most often occurs in ferrets age 4 and up, but in some instances has been documented in ferrets under one year of age. Part of the cause is genetic predisposition to adrenal tumors, but a bigger reason that adrenal tumors develop is a lack of sufficient melatonin in the ferret’s body. Melatonin performs a number of functions in the ferret’s body, but the main function that is directly related to adrenal disease is that it helps to prevent the pituitary gland from ‘over-producing’ certain hormones. Luteinizing hormone is the main one that can cause so much irritation to the adrenals that tumors can develop, and sufficient melatonin in the ferret’s system will prevent the over-production of that hormone, as well as follicle stimulating hormone, which, to a lesser extent, can also contribute to the formation of adrenal tumors. The tumors can grow on either the left adrenal gland, right adrenal gland, or both.

Melatonin supplements can also be used, either to treat adrenal disease or to help prevent it. Oral melatonin is very inexpensive and easy to use, but also often much less effective than using a melatonin implant, known as Ferretonin. When using oral melatonin, in order for it to actually have any kind of realistic chance of working, it must be given at approximately the same time very day, and this time should be 7-8 hours after sunrise. The recommended dosage is 1.0 mg/kg daily, as suggested by several well-known ferret vets, including Dr. Jerry Murray, who is a regular contributor to Ferrets Magazine online.

Oral melatonin is ‘better than nothing’, but I strongly feel that the melatonin implants are far more effective. They release a more steady flow of melatonin into the ferret’s body, and also alleviate the need for us to be consistent every single day with the time at which oral melatonin is given. Melatonin implants are about the size of a grain of rice and are given in the shoulder area. They remain effective for approximately 4 months for ferrets that already have adrenal disease. When used at a preventative, melatonin implants can probably be given every 6-8 months. Using them as a preventative could prolong the ferret’s life and could potentially save a lot of money down the road in the treatment of adrenal disease. This is truly a case where an ounce of prevention might be worth a pound of cure. You can learn more about melatonin implants for ferrets at the manufacturer’s website: http://melatek.net/ 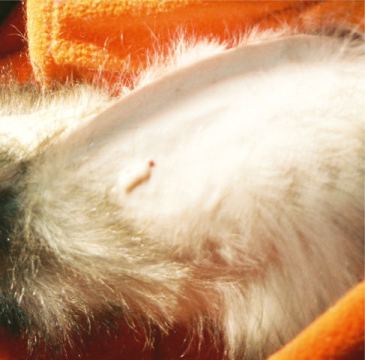 Aside from melatonin, there are several other treatment options for adrenal disease. Surgery is most effective, but might not be possible for any number of reasons. One reason might be that the over all health of the ferret will not allow it. Another could be that the adrenal tumor is on the right gland, and may have become too involved with the Vena Cava, the major artery in that area of the ferret’s body. Approximately 80% of adrenal tumors occur on the left gland and are thus usually good candidates for surgery. Those that occur on right gland require a far more complicated surgery, and in some cases cannot safely be removed at all. It should also be noted that bi-lateral adrenal removals are not normally done except in extreme circumstances. This is because the ferret will then be left without any adrenal glands to produce necessary hormones, a condition known as Addisons’s Disease. The ferret would then have to be on steroids for the rest of his life.

Surgery is the only option that will remove an adrenal tumor, but others could slow it’s growth considerably. LUPRON DEPOT shots have been used for a long time, and work in a way that is different from melatonin. Thus, they can be used in conjunction with melatonin implants, and the two together can provide a ferret with a long quality of life. Lupron Depot shots can be of the 1-month variety or the 4-month variety. Depot means ‘time-released’. This is vitally important, because a ‘regular’ Lupron shot, one that is not a depot, will last only 24 hours. It will not help the adrenal disease at all, and in fact can cause it to accelerate.

Many vets use a ‘standard’ 4-month Lupron Depot shot that is 200 mcg (micrograms). I have personally found this to be too weak to really help much, and I always ask the vet to use a 4-month shot of at least 500 mcg. I have also used stronger Lupron Depot shots than 500 mcg with ferrets with advanced adrenal disease, and I know of several very experienced ferret owners, including shelter operators, who also never start off a ferret with less than a 500 mcg dose.

DESLORELIN IMPLANTS work in the same way as the traditional Lupron Depot shots, meaning that they desensitize the gonadotropin releasing hormone receptors within the pituitary gland, and thus impair the production and release of luteinizing hormone and follicle stimulating hormone. However, the deslorelin implants have a number of advantages over Lupron Depot, and I am a huge fan of them. The trade name for these implants is Suprelorin, and the proper size for a ferret is the 4.7 mg implant. They are produced by a company in Australia called Peptech. They have been difficult to find in the U.S. because they are not yet ‘approved’ in the implant form by the FDA, even though the drug itself is approved. However, that is expected to change this year, as they are currently going through the FDA approval process, which is expected to be completed at some point in 2012. When this does happen, they will be readily available throughout the U.S., and presumably at a lower cost, as the current cost includes high shipping and customs fees.

Why am I such a fan of the deslorelin implants? I have personally had 5 ferrets implanted with deslorelin, and have seen results ranging from ‘very good’ to ‘incredible’. They will remain effective anywhere from 6 months to a year or more, depending on the size of the ferret and the severity of its adrenal disease. Thus, one deslorelin implant can cover the same period of time that would require from 2 to 4 of the 4-month Lupron Depot shots. This means less vet visits, less traumatic experiences for the ferret with the big needles used for implants and shots, and, ultimately, less over-all expense. And, from my experience, I’ve simply seen better results from the deslorelin implants than from the Lupron Depot shots. More can be learned about the Suprelorin implants and how they work at the manufacturer’s website: http://www.peptech.com/

Here is a summary of adrenal disease treatment options, in order of effectiveness:

These are symptoms that might indicate the presence of adrenal disease:

FUR LOSS OR THINNING COAT: An over-all thinning of the coat is one symptom. Balding in certain areas of the ferret’s body is another, and can include the tail, base of the tail, feet, shoulders, neck, head, and belly. I have had several ferrets with balding from adrenal disease, and no two have been alike.

ENLARGED VULVA: It may look almost like someone has glued a piece of Cheerio cereal to the vulva area. This is a dangerous situation for females because it can lead to infection, in addition to causing considerable discomfort or pain.

ENLARGED PROSTATE: Symptoms in males will include difficulty when urinating and/or frequent urination. This is a VERY dangerous condition for a male ferret, because an enlarged prostate will, at some point, block off the flow of urine completely. When this happens, the ferret’s bladder will rupture within a matter of a few hours, killing the ferret in a very bad way. There are some drugs that can help shrink an enlarged prostate more quickly than relying on the other adrenal disease treatments in this article, and they include propecia, casodex, and flutemide.

MUSCLE LOSS/WASTING: Usually in the front of the body, which can cause changes in the ferret’s body so that he or she becomes more ‘pear-shaped’.

INCREASED AGGRESSIVENESS: Either toward other ferrets or toward humans. Even the sweetest ferret might become ornery when their hormones are getting progressively more out of whack. This behavior could also include milder symptoms, such as increased ear licking or grooming of other ferrets.

THE SHAKES: Especially in the hind legs, when just laying around.

Note that an adrenal ferret might have one, some, or all of these symptoms. Also, some of these symptoms could be associated with other illnesses or diseases, but given the prevalence of adrenal disease, that possibility should be examined first.