Home » About Us » Shelter Statistics

Since our inception, the Ferret Association of Connecticut has maintained detailed shelter records. While some years may have minor gaps, this represents the core information. 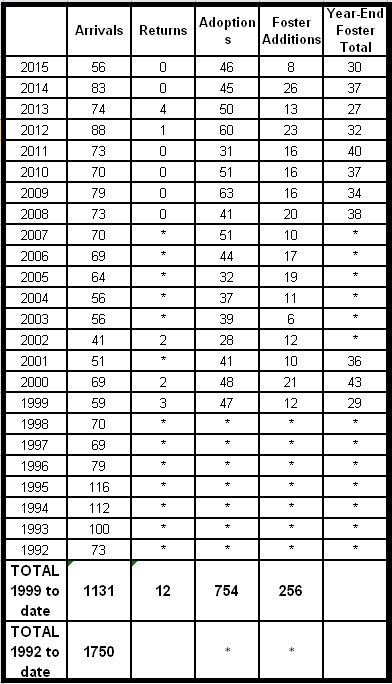 1999 was the first year FACT began systematically maintaining statistics for more than just Arrivals. Returned ferrets are not included as Arrivals. This data was not consistently maintained before 2008. However, returned animal numbers have always been very low.

The difference between the total number of ferrets that arrived at FACT and the total number adopted/fostered differs primarily due to overlap between one calendar year and another.  Other variances occur because of a) ferrets that were found and reunited with their owner; b) those that may have passed on while at the shelter; c) those that were transferred to other shelters for adoption.

Foster Program – While the Foster Program unofficially began in 1992, Year end numbers for the first years as well as 2002 through 2007 are missing. FACT consistently had between 30-40 ferrets in the foster program during that period.