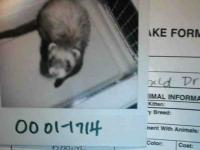 Hurricane Karina was one of the deadliest and most destructive storms ever to hit the United States. It’s  after-effects forced enormous changes in the way animals would be treated before and after natural disasters. Few  in the ferret community were close enough to provide help at ground zero.  So we did our best to help from afar. This is a brief summation of those efforts and what FACT did afterwards.

FACT’s then President Ann Gruden and two other members of the Ferret Mailing List – Terry C in AZ and Anne in Chicago formed an ad hoc mighty Meassage Board Review Team of 3 with a mission:

Before there were places like Facebook, Instagram, or other Social Media sites, all we had were sites such as Cragislist, Petfinders, ASPA, HSUS, Best Friends, NOLA, United Animal League and various uncoordinated web sources and animal groups on the ground and on the web where people were posting lost, found, missing pet and people ads and appeals.  16 organizational sites  in all were monitored and scanned daily and sometimes hourly.

We used the FACT’s website as the hub to post links, clues, organizational links, phone numbers, as well as photos if any as they were found – anything – the team uncovered that had to do about ferrets.  In all, the team discovered about 21 found and 63 lost postings. It was very difficult to tell, as there were duplicate posts, people were scattered, next to no photos. What kept everyone going were the desperate appeals for help in trying to find pets left with friends, neighbors, pet-sitters. Animals they were forced to leave.

Untold hours were spent pouring over threads and cross-checking. And finally – when everyone was becoming so discouraged – a success emerged! Widdershins – a MICROCHIPPED ferret found in Metarie, LA was cross-referenced with a post from his owner who was evacuated. Widdershins was in foster care in Baton Rouge and was reunited with his owner in Boston. Terry C. helped make the speedy connection and expedited the identification getting Widdershins back to his thrilled owner.

Sadly, too many little lives were lost and many families broken. Our town ACO – a former ferret owner – was one of the many animal welfare volunteers who spent his vacation in NOLA in the the following weeks. They worked tirelessly helping lost animals. Yes, he found ferrets remaining in the ruins – but none that had survived.

We kept the worksheet the team used as a reminder and a memorial to those who lost and never recovered pets that horrible day. We need to remember that disasters happen and we must prepare for our companions as well as ourselves.

Following Katrina, FACT’s Board of Directors established the Ferret Emergency Disaster Fund to be able to provide support for situations like these. Won’t you make a donation so we can be there anytime ferrets anywhere need us again?