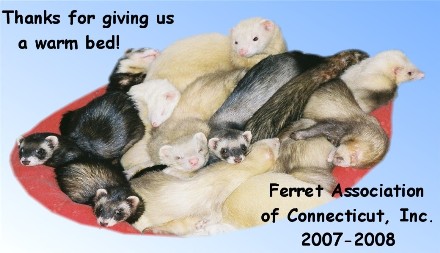 On September 16, 2007, due to personal and health hardships, Unique Impressions Ferretry owner/operator Douglas McKay surrendered all of his ferrets to Ferrets Dream House Shelter in Lynx, Ohio. There were a total of about 750 surrendered to the shelter.

These were the conditions at Unique Impressions Ferretry. Warning. Images are graphic and heart-wrenching.

President Ann Gruden, and Shelter Director Vanessa Gruden were scheduled to attend the American Humane Association conference in Alexandria, VA. FACT’s board decided, as we were already nearly halfway to Lynx, Ohio, that we should rent a van and bring back as many ferrets as possible to the Northeast. We contacted area shelters to see how many they might be able to take. Concerned Ferret Owners in New Jersey said they would take between 20 and 30; Massachusetts Friends of Ferrets requested 8; and Something Up My Sleeve Shelter in Maryland indicated they would take up to 5.

Renting a Dodge Caravan, FACT made the trip there on September 30th, returning with 48 ferrets of various ages and sexes in the wee hours of October 1st. 22 ferrets were dropped at Concerned Ferret Owners shelter in Washington, NJ at midnight (5 for SUMS and 17 for CFO). The remaining 18 arrived at the FACT shelter around 3:30 am. They were immediately placed into more spacious, quarantine quarters.

In addition, FACT donated $1,000 to Ferrets Dream House Shelter to help cover the cost of transportation and care. The funds came from FACT’s Ferret Emergency-Disaster Fund established following Hurricane Katrina to deal with “disasters” affecting ferrets. FACT’s board agreed that this surrender, representing the largest ferret surrender/rescue in US history, met the qualifications established for the fund.

FACT also tapped the Disaster Fund as well as general shelter funds to help pay for the neutering/spaying of the 18 ferrets (13 females, 5 males); the cost of the transport; medications, vaccinations and necessary supplies to house and care for the added burden on FACT. Many of these ferrets were very skittish and unaccustomed to handling. They required a lot of time to become fully adoptable to anyone other than very experienced owners.

Kris Mewton produced a Fifth Anniversary Tribute to the Ohio Rescue lest anyone EVER forget what these ferrets went through.

On January 6, 2008, FACT took possession of an extra 4 ferrets (1 female and 3 males) that were returned to Ferrets Dream House Shelter from the original rescue. That brought FACT to a total of 22 ferrets that we were able to take in from this unprecedented ferret rescue. We are happy to add that all the ferrets originally surrendered to Ferrets Dream House Shelter were re-homed or placed in the protective care of shelters across the US.

While it’s possible to raise money after a disaster strikes, situations like these remind us that cash is needed immediately – for triage, transport, housing, and communications.   Ferret emergencies strike without warning anywhere. FACT created the Ferret Emergency Disaster Fund to help. Won’t you make a donation now so we can be ready when they need us?

Below we share some of the indelible images of the ferrets that came back with us on the long trip in the Fall of 2007. 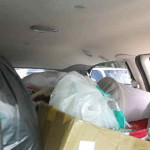 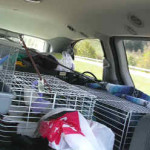 Fully Loaded on the Return Trip With Ferrets 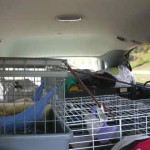 Inside the Van – Cages Stacked 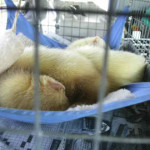 A Hammock Built for Two! 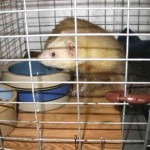 Hey – Getting My Whiskers Wet Here! 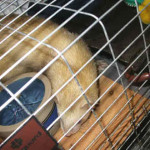 What’s This? A Floor? 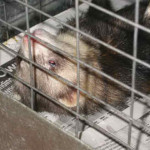 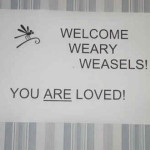 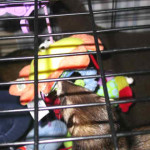 What Are Toys? Do You Eat Them? 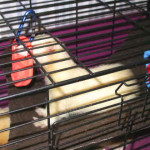 Hey Guys – Don’t Think This Is To Eat! 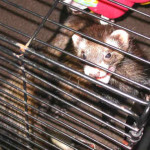 Don’t Forget Me In Here! 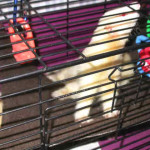 There’s A Lot of Interesting Smells Around Here – CLEAN Ones! 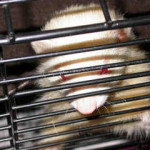 Don’t leave me behind! 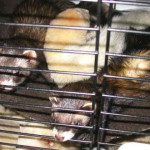 Our Turn For Freedom! 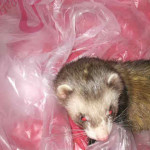 I GOT Your Bedding Bag – So What?! 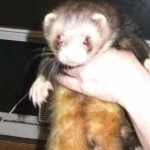 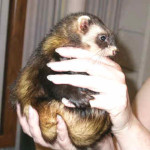 Another Sweetie Holds On – She’s Scared! 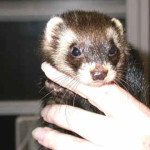