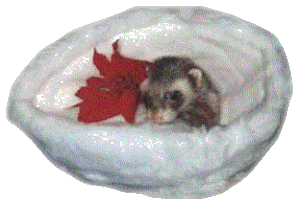 Mira In Her Christmas Basket

MIRA – Short for MIRAcle – and that she is. Here is Mira and her on-going story, as told in e-mails, updates to the Ferret Mailing List, and in the bi-monthly Foster Grandparent newsletter.

Our apologies, once again, for the delay in updating everyone on Mira’s progress. We kept hoping that we’d be able to report on Mira’s surgery, but as of yet, she is still in a holding pattern. She is still scheduled to have reconstruction surgery on her leg, but once again, the date has been postponed indefinitely until all the healing that Mother Nature and time provide has been exhausted.

We can report that Mira has become quite the brat! It’s amazing just how quick animals (and some people too!) can turn a disadvantage into an advantage! In her case, Mira has learned to play on the emotions of the shelter staff to get her way and to get away – with close to – murder! Yes, Mira nips! She will tackle hands, fingers and, when the spirit especially moves her and she thinks no one will catch her, ankles and insteps! Her secret? Knowing just how to be exceptionally cute and doing her very best “roll-over-on-your-back” and “who could hit a poor, physically-challenged” handicapped ferret? No one can, of course! So, we’ve had to take to putting her back into the “old lady room” whenever her exuberant spirit gets the better of her usually fine temperament while she’s out in the “main” section of the house for her continuing nightly physical therapy sessions.

Physically, Mira continues her Mira-specialized hoping and side leaping. I continue to try to get a photo of her in her very special Mira pose which looks more like that of a prairie dog than a ferret’s! It’s her way of climbing up higher to get a better view of the world – instead, she sits up on her hind legs and can almost twirl halfway around in a pirouette to see what’s happening!

Have you ever watched a young child initiate play with an older or larger youngster?

It usually starts out innocent enough (you think “how cute!”), but all too often escalates into a pushing match —- and everyone know this smaller/younger child will need to capitulate. But before doing so, he picks up the pace of what is quickly turning into a fight and, just when it appears that the child is about to get their ears pinned back, they stop…fall to the ground…start crying….and, for all the world, make the other youngster appear the aggressor!

If you have a mental picture (maybe of you as a child in either role!) or of one of your own child, then you’re watching Mira at play!

In short, she’s a BRAT! Demonstrating typical bratty child behavior, right down to the squeal and rolling over on her back writhing in agony. Of course, no one has hurt her! And, of course, she ALWAYS starts it!

As soon as she’s “saved” by whatever inexperienced human comes running, she promptly bounces (well, it’s more of a waddling, bounce!) away. If you pick her up to she if she’s okay and give her a kiss, she immediately initiates another game of “make someone squeal” going so far as to “bite” your nose if you refuse to engage in the game! BRAT – actually SPOILED BRAT is a better description!

But while you CAN get mad at her, you can never STAY mad, because she has just the most engaging personality of any ferret you’ll ever meet. And, so her games happily continue unabated!

It does not appear that Mira’s fur will ever grow back around her upper chest and back from the bleach scarring. But at least, the scar tissue doesn’t pull on her tightly like it used to. “Mother Nature” and time are slowly healing her wounds.

Her right leg is still a concern — but not a pressing one. Her paws no longer swell, but the skin flap on her upper arm still keeps her leg tucked close to her body causing her “hobbled” walking pattern. But she’s not in pain – as evidenced by her wild abandon in playing and her resourcefulness at getting where she wants to go!

Thank you for reminding us how long since we’d done a Mira update! We keep her foster “grandparents” posted of her progress in the Foster Program newsletter (FACT Ferret Poop) but just haven’t posted to the general Ferret Mailing List in a long time.

I can tell you that she is doing just wonderfully! Actually, she is a SPOILED BRAT who runs with our herd of ferrets — well, not quite runs, it is more of a hobbly kind of hop! — but she manages to keep up with all of them, and is now, after over 9 months with them, able to hold her own when the boys get a bit too wild for her abilities!

She has a “bad girl attitude,” and when she is full of herself, will come up and lick then nibble on the top of your foot – then dance away knowing no one will hit her! (How could anyone? She is so cute and spoiled, that she could get away with murder!) If we yell NO – she just dances back for another quick nip and run!!!

One of her front legs is still deformed. The growth was stunted, so she has what appears to be a flat foot on a very short leg. Our vet was able to cut some of the skin to give her more movement, but there is nothing we can do about making the leg normal for her. One by-product of the damage is that she HATES anyone trying to cut her nails, which are also somewhat deformed. At first she SCREAMED if we cut one or two nails – so trying to trim the was usually a several day affair.

While she still is unhappy with the prospect, she will tolerate having most of them done all at once. Of course, she still insists on squirming a lot and letting us know just how unhappy she is with the entire process!

Her bleach scars have healed as much as they are going to. There is still some scar tissue and very fine wisps of hair – but Mira has no idea that she is “different” then anyone else here.

Thank you for caring about her! She has many foster “grandparents” who care deeply about her and make sure she gets many toys to play with — though stealing “gruel” from old people is one of her more favorite games!